The historic First Lutheran Church was founded by a group of German immigrants in 1852 and named the First German Evangelical Lutheran Church.  The trustees invite the community to the annual service to be held on Sunday, September 18 at 2:00 p.m. The church is located at 711 N. Pleasant View Road on the corner of Old Sauk and Pleasant View Roads in Middleton.

Regular services at the church were discontinued in 1947.  The church fell into disrepair and was scheduled to be burned to the ground when with foresight the local community rallied, saved, and restored it.  The Lutheran synod gifted this beloved landmark to the community.  Those attending this year's annual service will enjoy music by the Madison Maennerchor as well as that of pianist Sybil Klatt.  Reverend Kenneth Michaelis, a descendant of two church founders will officiate.

The first Madison all male choir was formed in 1852 by Francis Massing.  He called it the Madison Maennerchor.  Still in existence it is the oldest German singing choir in Wisconsin and the second oldest in the nation.  The choir performs German, American and “Gemütlichkeit” music.  (Gemütlichkeit is a German word conveying a state or feeling of warmth, friendliness and good cheer.) Members are not limited to those with German ancestry but include all who are interested in singing or wish to support the choir.

In 1884 the historic First German Evangelical Lutheran Church in West Middleton formed their own Maennerchoir.  Many of those early members have descendants living in Middleton and the surrounding communities today. 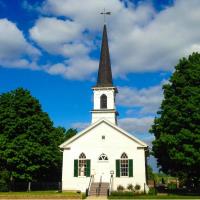 This Community Event & Promotion is promoted by Middleton Chamber of Commerce.